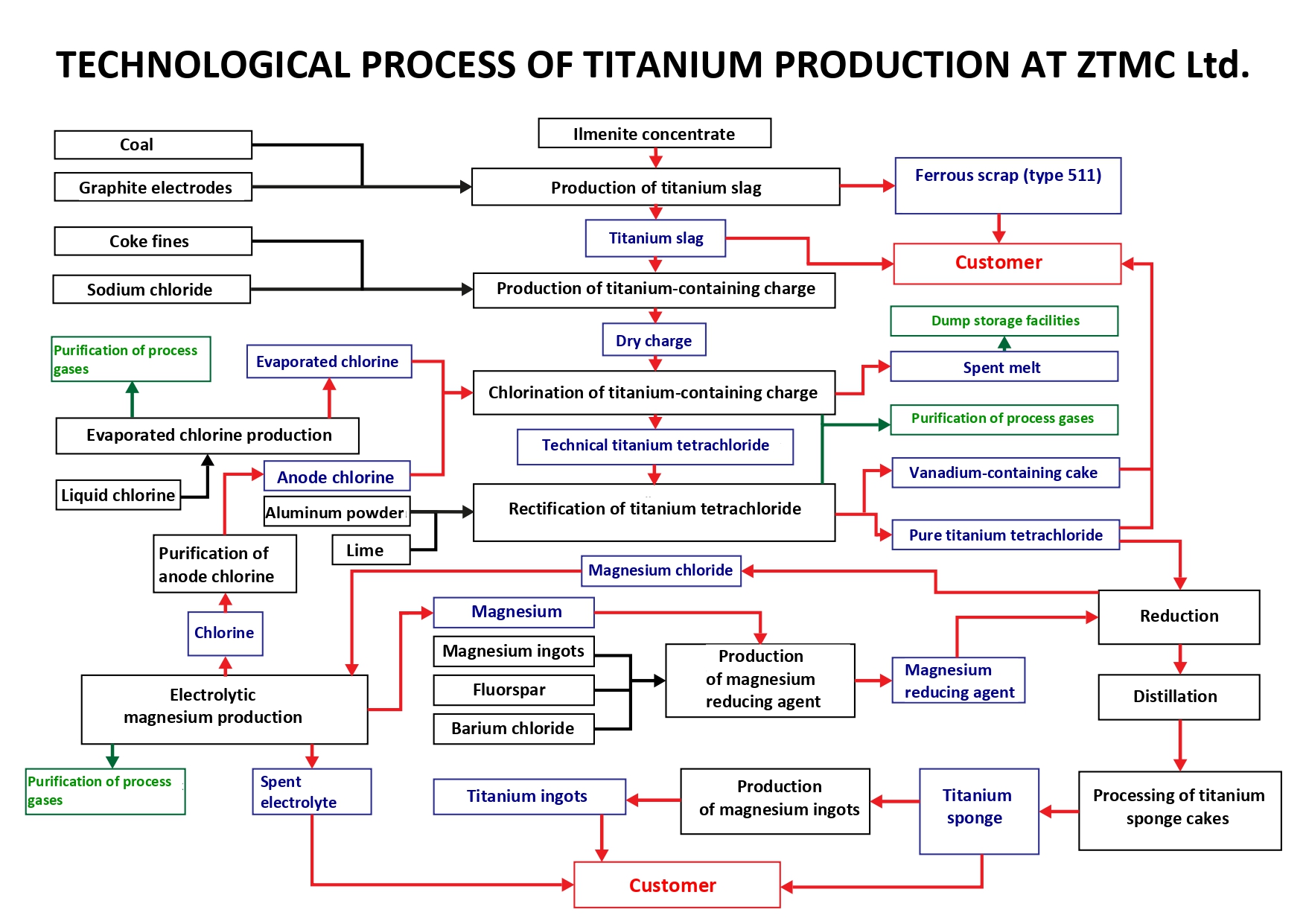 – Titanium slag production by the method of ilmenite concentrate melting in ore-and-thermal furnace;

Titanium slag is produced by ore-and-thermal reduction electrosmelting of ilmenite concentrate that contain not less than 63 % of TiO2 and carbonaceous reducer, such as coal, coke or anthracite. The ilmenite concentrate and carbonaceous reducer, pregrinded into blocks under 10mm in size, are melted in the ore-and-thermal furnace (OTF) at 1650-1800оС. Thereafter, slag is discharged and, after cooling-down, is routed for titanium-containing charge preparation. A by-product generated as the result of melting is removed to a storage facility for sale. OTF waste gases are routed to gas purification.

Salt chlorinator is a continuously working apparatus. The casing is cylinder-shaped, the bottom is flat, and the arch is of spherical form. Titanium-containing charge is continuously fed onto the surface of molten salt by the feed bin auger. Chlorine gas is fed into the melt through chlorinator side tuyeres located on its lower part. Two products are discharged from the chlorinator, namely, gas-vapor mixture (GVM) of chlorination products and used melt. Used melt is discharged from the chlorinator intermittently and partially, after cooling-down it is removed to a wastedump. GVM is discharged from the chlorinator continuously and goes to the apparatus system for GVM cleaning and commercial titanium tetrachloride (CTT) condensation. GVM cleaning apparatuses consists of dust chamber, spray-type scrubber. CTT condensation apparatuses consists of two tandem spray-type condensers wherein CTT condensates in the process of cooling. After sedimentation in sediment boxes the generated commercial titanium tetrachloride is routed to the rectification area for purification.

Magnesium is produced by the method of electrolytic decomposition of magnesium chlorine melt and anhydrous carnallite in diaphragm-free electrolyzers. Magnesium dichloride, anhydrous carnallite, fluorspar concentrate, and common salt are used as a process melt for electrolyzers. As the result of the electrolysis process metal magnesium is produced, which, following afterpurification, is routed to titanium production. Chlorine gas is routed to the salt chlorinator, and waste products, namely, slime and slime electronic mixture, are routed to a wastedump or to a Customer.

Titanium sponge blocks are processed in the following steps:

– Extraction of a titanium sponge block from a retort;

– Cleanout of titanium sponge remains from a retort (retort sweepings);

– Crushing of titanium sponge bloom and skull with presses and mills;

– Screening of crushed titanium sponge and separation of commercial fractions;

Packed titanium sponge is batched according to contracts and sent to customers.